March 01, 2013
One of the things I’ve been blessed enough to get to do is read to my daughters class. In Second grade this was the highlight of my month. I got to pick any book I wanted, usually something a little off-normal, and watch the kids actual;y be interested in the story. In almost all cases I left the books behind so the kids could borrow them throughout the year.

I remember clearly how I read Crazy Hair by Neil Gaiman (picked up that morning in a rush from the Comic Book Store… They saved the day). After that I mentioned that there was another book, The Wolves in the Walls, but it was kind of scary, so I didn’t bring it. They unanimously decided they wanted The Wolves in the Walls, and asked me about it the next month. That book went over really well with them.

I usually got 15 minutes, and a book would take maybe 5 – 10 minutes, so I always had a few minutes left over to fill. At those times it’s always worth having a set of Rory’s Story Cubes handy. They have a set of things (vowels) and verbs (actions). You just roll a set and make up some story based on the pictures that come up.
In the class I would roll and make up the story for the kids. But at home or with friends we split the dice, so each person adds to the story. It’s similar to being at camp, where you go around the circle, each person adding to a story, but a little more directed which helps move things along.

For example, with this roll: 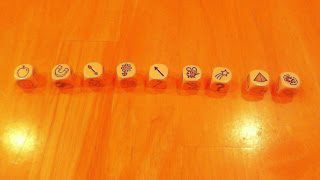 Once there was a boy who was in love with apples. He was drawn to them like a magnet to steel, nothing could keep them apart. He could sniff out an apple no matter where it was, his nose was an apple compass. He loved apples so much, his mother decided to take him to an orchard, where he had a great time pointing out apples that had fallen among the flowers.

While he was pointing out one specific, beautiful apple, a swarm of bees came down on him. The swarm landed on him like a star falling from the sky. He was quickly burning everywhere from the stings.

The boy hadn’t realized that he had accidentally stepped on a bee hive. In case you didn’t know, the bee hive is like a pyramid, a sacred shrine that they also get to call home and work in, alongside their queen. This specific bee sat upon her throne, ruling over her subjects while she devoured everything in her path, like a swarm of beetles protecting the throne and burrowing under the skin of anyone who comes near, devouring them from the inside out.

Anyone else have a simple, fun thinking game?